While there is really nothing ground-breaking in its concept (we all know that those with insulin resistance, diabetes, and/or PCOS have a difficult time with carbs), I really appreciated the personalized approach it takes in assisting a person in finding out which carbs negatively affect them the most. Everyone's body is different, so a "one-size-fits-all" approach is undesirable and ineffective.

The author deals with carb sensitivity herself, so she is not unsympathetic to the readers' plights! Her program offers many simple recipes, menu examples, and relatively simple strength-training exercises. Be prepared to drink a lot of smoothies and protein shakes (whey isolate protein is recommended). Turner does seem to peddle her supplements a fair bit, but those are easily ignored; you can always use your supplement(s) of choice, so long as you're getting what your body requires.

This book mainly outlines a 6-week elimination program - not dissimilar to one of those "elimination diets" done to assess food allergies or sensitivities - in order to assist you in finding out which carbs you're the most sensitive to, affecting weight loss and overall health.
Posted by BWK Art ~ Thursday, March 03, 2016 No comments:

The Boy Who Loved Anne Frank

There are very few women my age who have NOT read The Diary of Anne Frank; it is one of the few secular books that have had an impact on my life. The author, Ellen Feldman, draws from that harrowing true life story and offers us a glimpse of what may have happened if Peter - Anne's young love - would have survived the Nazi regime and continued to live his life, after immigrating to America.

The young Jewish boy, Peter van Pels (or van Daan as Anne renames him in her diary) was hidden in the "secret annex" along with the Frank family; he was never reported as dead or alive after the War. What IF Peter van Pels, the boy who loved Anne Frank, survived the Holocaust? Would he have remained trapped in a psychological annex for the rest of his life? That is the story Feldman weaves in this scenario of 'what ifs'. It is written from Peter's perspective as he struggles mentally with what he has been through, what he has survived, and things he will never be able to forget.

While it was not the narrative I was expecting (to be honest, I initially thought it was book about Peter and Anne while they were living in the annex), it was an interesting read and one of those stories that make you think.
Posted by BWK Art ~ Tuesday, November 17, 2015 No comments:

This was a very unique book. At times, it was difficult to build a 'relationship' with the main character, due to the jumble of names and information presented in a disjointed style. It felt a bit too much like deciphering 'texting talk.' (Perhaps, because it is classified as a young-adult book? I'm not sure.) I also found it rather confusing when the main character wasn't overly clear regarding her identity, coupled with the often-times baffling stream-of-consciousness writing style and switch in narrators. All the pilot/flying talk was a bit dull and I'll be honest... I found myself skimming through a lot of it. However, the core premise of the plot was well put together and kept you reading.

The story, of course, was heartbreaking but interestingly written, with a lot of heart. When it all comes down to it and you peel everything else away, this is basically a story about 2 bosom friends who would - and DO - anything for the other.
Posted by BWK Art ~ Tuesday, November 10, 2015 No comments:

It appears I am not the only one perplexed by the acclaim this book has received by countless reviewers. Granted, the novel is well-liked by those responding to something in the story that evidently touched them personally; however, I failed to have such an experience.

While the struggles and trials of the characters are weighty, the writing was such that it lent neither power, nor a moving quality to them. The characters themselves seemed two-dimensional and ultimately, failed to strike a chord.

While facts and events surrounding WWII were obviously quite well-researched, the tale itself was over-written and melodramatic, lacking in depth. The tepid, clichéd writing style was overly distracting and, at times, downright cheesy. The reader is all but told what to feel by the author, with copious adverbs and adjectives, which merely detracted from a plot that actually had a lot of potential. I'll be giving her other books a miss.
Posted by BWK Art ~ Saturday, October 24, 2015 No comments: 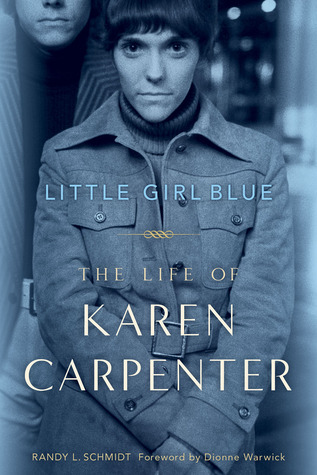 I grew up listening to Karen Carpenter's velvet voice wafting from our record player in the late 70s and 80s. My mom always had her records playing, so The Carpenters' music was, in many ways, the soundtrack of my youth. When I was around years old 13 years old, I remember watching the made-for-TV movie of her life. Learning about the sad girl behind the amazing voice always stuck with me. Karen life was obviously tinged with a deep sadness, with hopes unfulfilled.

While Little Girl Blue came across as somewhat cold and factual at times, it was obviously well-researched. I learned many things that I did not know previously about Karen's life.

Karen's story in Little Girl Blue is not a "pleasant" read, by any means, but it is a worthwhile one, even if you aren't a fan of the music.
Posted by BWK Art ~ Monday, August 03, 2015 2 comments:

The New Rules of Lifting for Women I was up all night last night (caffeine overload!), so I read NROLFW in its entirety. Through my own personal research, I've learned that lifting heavy is a GOOD thing for us women - Schuler's research certainly confirmed this. I am rather disappointed, though, that I won't have the opportunity to give an honest "tried and true" or "meh" opinion on this actual program anytime soon.

I truly enjoyed the author's writing style. He has a great sense of humor and the science was well presented and easy-to-understand for the most part, so I was able to take quite a lot away from it. I love the fact that he debunks the myth that more reps with light weights are optimal for women, along with low-calorie diets and excessive cardio as means to "healthy weight loss".

However, there was one thing that rubbed me the wrong way, near the end of the book. In chapter 13 entitled "YES, YOU", Schuler mentions a woman who approaches him about doing a workout, but was not prepared to enroll in a gym or purchase home gym equipment. His response was:


"I assume she doesn't really want to do the program... There's a clear path from where they are to where they say they want to be. But there's just as clear a roadblock they've installed that prevents them from following that path."

Perhaps I'm misreading it, but I found Schuler's tone smuggishly dismissive in this instance. Did this woman install that 'roadblock' by choice, or perhaps was it because she simply could not afford either of the options this book calls for (gym membership or home gym)? The fact that she approached the author for information clearly shows she was willing and interested in the program. And yet, he *assumes* she doesn't want to do it. For some, it is not due to lack enthusiasm, willingness, or desire to try the program... but sometimes circumstances just don't allow it. Sometimes we don't create the roadblocks - they are just there!

The program calls for at least a dumbbell set, barbell with weights (and a rack, I'm assuming), chin-up bar, stability ball, adjustable weight bench, and steps. Many of the other workouts call for more elaborate equipment. I dare say a good number of New Rules readers aren't financially able to purchase a gym membership or even gym equipment for that matter, either of which are necessary to do the program. In fact, many don't even have access to a gym in their area - I don't, living in a very small town. Granted, there are 'Body Weight' training moves that one could do without equipment, but they only make up a small part of the actual program and do not really offer the full degree of training the book advocates.

So, while I would love to put the program to the test - and am ready to give it the time and effort it deserves - I cannot because my circumstances don't allow it. Maybe someday. Guess I'll just stick to my kettlebells for now.
Posted by BWK Art ~ Thursday, July 04, 2013 1 comment:

Ok, I'll admit. I struggled to finish this one and was pretty eager to see it end. Though I've only had time and energy to read before bed lately, I was "okay" with putting The Mummy Case down far too quickly; picking it up again seemed to be a chore, not a delight.

The first novel, Crocodile on the Sandbank, was what lured me into the series in the first place. I enjoyed the witty repartee between Emerson and Peabody; I could relate to Peabody, and found Emerson totally entertaining. And the mystery aspect of Crocodile was attention-grabbing enough to keep me reading with interest. The second novel (The Curse of the Pharaohs) ...meh, not so much. And this third one, even less captivating than the second. Not that Peters isn't a good writer. Not that the characters aren't amusing (although, for me, I found the series started to lag once Ramses the Egyptologist wunderkind was introduced). Something was just... lacking.

I suppose it's the fact I don't really enjoy reading so much light-hearted banter and goings-on amidst a mystery. Perhaps it's the serious-toned, dreadful mysteries I prefer (a la Agatha Christie, Sherlock Holmes, Anne Perry). Perhaps light-hearted mysteries aren't my cup of tea?

Either way, it's not you, Elizabeth Peters – it's me…

Nevertheless, I am willing to read the next novel in the Amelia Peabody series, at some point in time, hoping that my stick-to-itiveness will be rewarded and my interest in the rest of the series will be rekindled.
Posted by BWK Art ~ Thursday, January 17, 2013 No comments:

Any avid reader knows that the best conundrum of all is deciding what book to read next. To see earlier reviews, visit the archives. Find me at Goodreads.com
« HOME